Current P.h.D student in the department of Mechanical Engineering of University of Sheffield.

My research interests are mainly concentrated in the field of machine learning, more specifically, Bayes based inference. Pragmatically, apply the statistical inference in the predication of particle damping behaviour which is characterised in a form of non-linear problem.

Particle damping as a branch of the vibration attenuation solution features a great degree of non-linearity in its damping behaviour which ascribes its non-linear attributes to a diverse range of factors such as external excitation level, frequency, internal geometry of the particles, particle stiffness etc. Inasmuch of the accompany of a switching behaviour of particle dynamical behaviour at different excitation conditions( majorly different amplitudes and frequencies), the particle damping is considered to have generally 3 different types of damping modes associated with the Solid, Liquid and Gas state of the particle beds at each of the corresponding vibration conditions. No comprehensive analytical method is currently available to be sufficiently effective to model the damping behaviour across a broad amplitude and frequency span. Numerical computation based Discrete Finite Element Methods are rather restricted by its scale limitations. Hence as a natural response to the predicament, an inductive statistical based pure mathematical model will be introduced as an immediate recourse, of which there is no physical insight of the damping system required to be analysed.

In the scope of statistical analysis in the Bayesian framework, Gaussian Process is a common and reasonable choice. However, the traditional Gaussian Process has difficulty in handling problems involving heteroscedasticity which implies a non-stationary prediction of the data space. In this case, a treed Gaussian process is selected to split the data space into different regimes using binary decision tree, so as to give stationary GP in each regime. In relation to particle damping, since it has three basic damping modes, the TGP is expected to identify all the 3 modes by giving corresponding regime splits, in which a GP with a set of independent parameters performs the prediction.

Advantage of using TGP: No physical insight required, relatively fast, subject to no drawbacks suffered by empirical based method, counters heteroscedasticity, results given are mostly quite smooth with a confidence interval.

Prospect: machine learning will become the forefront fighting against non-linear problems, because more and more factors affecting a physical system will be discovered as the science advances. As all these factors entwine and entangle, it will be extremely hard to find solutions in an analytical way, and computer FEM simulations will not be representative enough if the real life system is too large in scale. Detouring the physics and modelling using an inductive (for example) statistical based way will certainly gain its promotion. 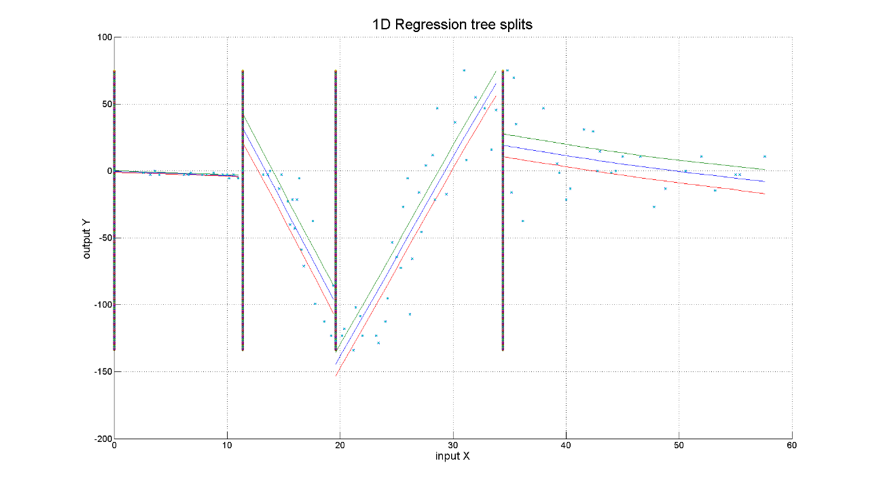 Non-stationary prediction given by using TGP

The salient distinction in the confidence intervals between regime to regime (green and red lines) indicates the heteroscedasticity.